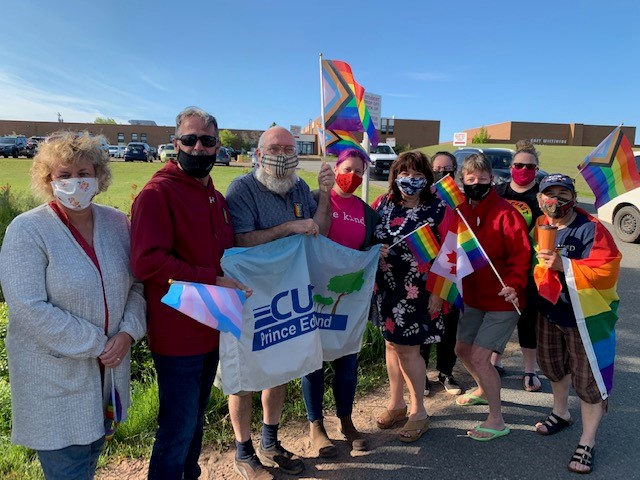 Charlottetown – June 15, 2021 –  CUPE PEI expresses grave concerns over reports that LGBTQ2+ students were faced with harassment and intimidation at the East Wiltshire School in Cornwall. CUPE PEI reiterates the importance of safe spaces in PEI Schools. Our members are committed to doing our part to make schools a safe environment for all students and employees.

On Monday morning, CUPE PEI leadership was present at the peaceful vigil in support of LGBTQ2+ students at the East Wiltshire School: “I was happy to see so many folks from the community and members of CUPE local 3260 representing educational workers,” said Leonard Gallant, President of CUPE PEI.

“There was a lot of noise made about the recent events, and that’s good. It means we, as a society, are confronting the ugly truth that we should be doing better to end discrimination against LGBTQ2+ students,” he added.

CUPE PEI is committed to fighting discrimination and hate in our workplaces and in our communities. “We must work every day to ensure everybody can work and study in an environment free from prejudice, harassment, bullying and intimidation,” said Gallant.

Every year, CUPE celebrates June as Pride Month. “Pride month is not just a time to celebrate, it’s also a time to reflect and to recommit ourselves to fight against all forms of oppression against LGBTQ2+ people. There is still much progress to be made,” concluded Gallant.